I was wondering if there any automation tools out there that can help with the process of testing an iPhone application on the device itself and not on a simulator.

Ideally, it would have to simulate button clicks, selections, and general alphanumeric input (sort of like how selenium can be used with web browsers). 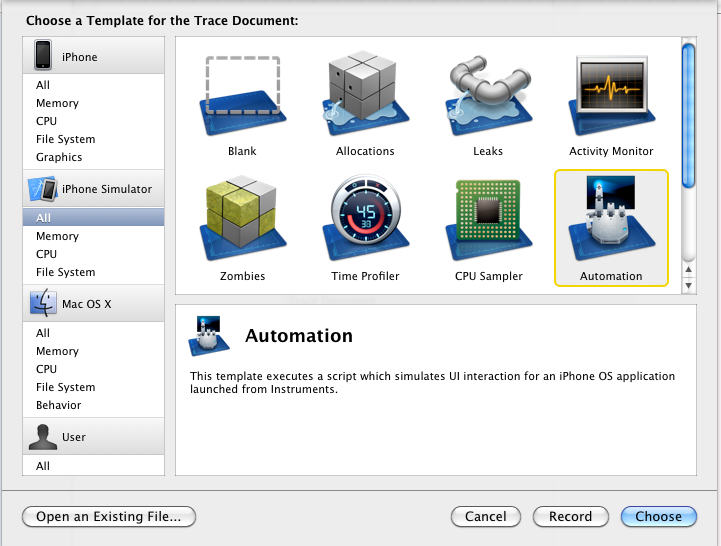 Two other non-answers are Selenium which can be used for testing web applications, and Sikuli which does image comparison based automation.

Sikuli will let you automate the use of the emulator itself, based just on screen image captures, but you have explicitly stated that you don't want to test on the emulator.

There is now iCuke for testing with Cucumber for iPhone apps as well. It is open source with the code on github here.

Update: There is now a Selenium driver for testing native iOS apps as well ios-driver

I can suggest you Appium is the best tool for Android & iOS mobile testing. I'm working on appium from last 6 months in my organization.

The main advantages of using Appium is:

There is also few Disadvantages of Appium:

For Android, No Support for Android API level < 17. It means you want to use Android v-4.2 or greater version.

All tools I know for iOS apps testing are:

I've successfully used Appium and Calabash, and I can recommend them.

I know WebDriver (Selenium 2.0) has iPhone Driver, though I have not used it myself.

We have successfully used iCuke for creating Cucumber automated acceptance tests. Everything is documented in this blog post.

PerfectoMobile.com and DeviceAnywhere.com provide services where you can run scripts against racked devices in their data center. They both provide access to a variety of devices; you get a remote view of the screen and can script various touch and hardware events. Scripting tools provide for bitmap and OCR recognition. We have experimented with both, but it's too early to say how they'll work long term.

SeeTest from Experitest is a cross-platform tool for iPhone, Android, WindowsMobile, Symbian and Blackberry. The Object identification is based on 4 methods:

I think you can give a try to this tool.

Have you considered Telerik Test Studio for iOS?

I have succesfull expirience using FoneMonkey. Currently looking into iOSNativeDriver. Also was using UI Automation from Apple but faced with an issue during running test from the command line, that was required for CI Server.

There are many applications for mobile testing in this world every day, so I couldn't choose correct apps tester. I searched for mobile apps testing keywords in Google, Yahoo and Bing. Many are listed on the first search results page. One I would use is http://mobileappstesting.contussupport.com, because this sites gave to remove 5 bugs free to My apps.

Hopefully, these will help.

There is a new Native/Hybrid iOS app testing framework called Appium on GitHub which was announced at the Mobile Testing Summit last week. Obviously, due to its young age you may not be willing to take it up.

The Appium Git page has this to say about it:

Appium is a test automation tool for use with native and hybrid iOS applications. It uses the webdriver JSON wire protocol to drive Apple's UIAutomation. Appium is based on Dan Cuellar's work on iOS Auto.

Appium uses the Bottle micro web-framework, and has the goal of working with all off the shelf Selenium client libraries.

There are two big benefits to testing with Appium:

1: Appium uses Apple's UIAutomation library under the hood to perform the automation, which means you do not have to recompile your app or modify in any way to be able to test automate it.

2: With Appium, you are able to write your test in your choice of programming language, using the Selenium WebDriver API and language-specific client libraries. If you only used UIAutomation, you would be required to write tests in JavaScript, and only run the tests through the Instruments application. With Appium, you can test your native iOS app with any language, and with your preferred dev tools.

Yesterday I was looking for a tool to test iOS app (frontend of the app), I found MonkeyTalk (you can see more here http://www.gorillalogic.com/book/about-monkeytalk-platform) and I can ensure that this is the tool that you are looking for.

I spent two hours to set it up. The tool provide to create the TC based on what you did ( tap/scroll/and so on..) with the app.

I have used Test Studio for testing iOS app and found its helpful. Following are the things I would like to mention about Test Studio:

My take on iPhone testing is mAutomate. Here are some interesting features I liked:

Not the answer you're looking for? Browse other questions tagged automated-testing tools mobile-automation iphone or ask your own question.

1
How do I automate testing installing an iPhone app?

57
What are some tools for testing Mobile web apps?
16
In house built testing tools
3
Regression testing for web services and SharePoint workflows - What should I research?
3
Choosing a tool for iOS UI automation providing recording and inspection of elements
1
Is it recommended to document how selenium automation tests are laid out?
2
Data Testing for Massive CSV/XML files
5
RESTful JSON Web API Testing - what tools?
2
Strategy of using Jira with tools for automated testing
24
Mobile automation: Boss wants 100% coverage. How feasible is that?
1
iOS Automation Testing on AWS