I need to import test cases from Excel to TFS 2013. For this I have already gone through the link SQA and VSTS, but my issue is not getting resolved from these links. I can't use 'Test Case Migrator Plus' as for running any exe on my machine I need to ask special permissions from the IT help desk team which is in itself a big task.

Issue is I am not able to import Steps i.e. Action and Expected Result to TFS from Excel sheet. On trying to import these from Excel, everything (all actions and their expected results) get imported to one single column only, like shown below

How this thing can be achieved from Excel to TFS?

I had the same issue when migrating tests from a legacy tool to TFS. It was simply not possible, independent of any choices offered by Excel and TFS (really, I tried them all and wrote a 43 page document about my test conversion efforts).

Finally I was able to workaround the issue like this:

If you use three columns in Excel, you can even import many test cases into TFS at once. Column 1 needs to contain the test name, column 2 the action and column 3 the expected result. This image helps you to better understand it: 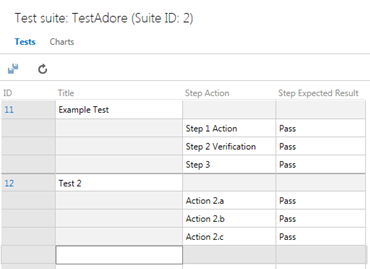 Depending on what you have as input, you can also do it with a bit of code, e.g. in C#. Just append some text, split columns by \t and rows by \r\n. Use Clipboard.SetText() and then paste in TFS.

The above worked well, but it only works for brand new test cases. If you have test cases that already have a test ID, you have to copy and paste individual steps and results to each test case. I learned that the hard way!!

After waiting long for this question, I am answering it myself.

Test Case Migrator Plus is a good, easy and only way for doing this. Our client agreed to this and he will raise an approval request for granting permissions to install and execute this import exe.

You have to format your test steps as XML:

Not the answer you're looking for? Browse other questions tagged manual-testing test-management testcase excel or ask your own question.

6
How to transfer Test Cases from one TFS2010 server to another
4
Should test cases contain more than one step with expected result (ISO 29119 definition)
2
Importing manual tests to TFS
3
exporting test cases from TFS MTM to excel
2
Exporting test results from TFS to Excel
4
How to design test cases for phone number and email input fields?
2
How to properly test manually a web app
0
How to manage "test activities" that take place between test cases in a test suite?
0
How to create test cases in order to test columns in an excel file?
1
Using snapshot tool to simply the assertion - data snapshot testing