How to escape JMeter variables within test components?

I've a variable foobar defined with the value my_value. When the sequence ${foobar} appears within a test component, it is converted into my_value. How can we stop this conversion?

Some examples that do not work:

None of the inputs above produces the output ${foobar}. How can we escape the sequence ${foobar} to avoid it being converted into my_value?

Actually there is no way to do it differently. Another non-scripting option is replacing 1st character (which is $) with equivalent provided via __char() function like:

Also it is not very recommended to use JavaScript (or any other languages except groovy) for scripting as it may become the bottleneck in case of severe loads and ruin your test. So consider using JSR223 Test Elements and make sure that you select "groovy" language in the dropdown.

This is the functionality of JMeter (like any other tool) to pass value of parameter when it's related variable is encountered with correct syntax. Even if I use some other tool and syntax of tool says when you encounter '${Firstname}' variable then replace it with its value as bound by the user, it will replace the same no matter whether I want to replace it at that time or not.

One more work around for this is possible if you have to achieve this configuration for different HTTP Requests as shown below.

For example: This is what you want to achieve 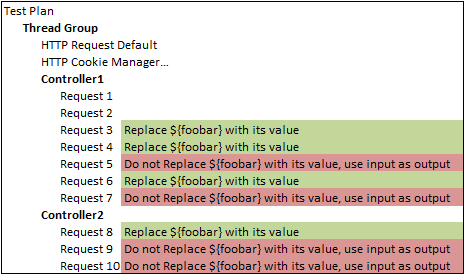 Then, you need to use the CSV file (variables) only within the HTTP Request scope as shown below. 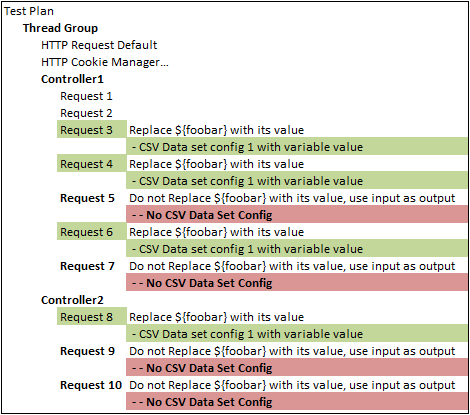 Note: This will increase your effort, but as said these are the work-arounds which will provide you what you want to achieve without using BSF.

Not the answer you're looking for? Browse other questions tagged jmeter or ask your own question.

1
Keeping JMeter User Defined Variables and Uses DRY?
2
CSVs and JMeter: using variables from a line in multiple samplers
0
How to visit multiple URLs within a single jmeter Test Plan
0
How to get or set the list of variables in JMeter?
1
Jmeter - Variables from input file to output file
2
How do I save JMeter variables created at runtime?
1
Extracting variables from multi line response in Jmeter
1
How to get API response XML values in to variables in Jmeter tool for matching purpose with DB?
0
Jmeter using newly defined variable in User Defined Variables
1
How to Store multiple id from one request and retrieve few id for update within the same thread group in jmeter?