How to limit test execution time in UFT/QTP?

I came across some situations (twice in one day, and I see they will not be rare) when test can run infinite time.

Like there is a wait realisation for some account operation but there is an error message displayed over progress bar which is not known by autotest. Message is not closed, progressbar is still on, test is running, running...

And there is another chance to get infinite execution is when UFT failes and displayes error message (which could not be handled by UFT itself), e.g.: 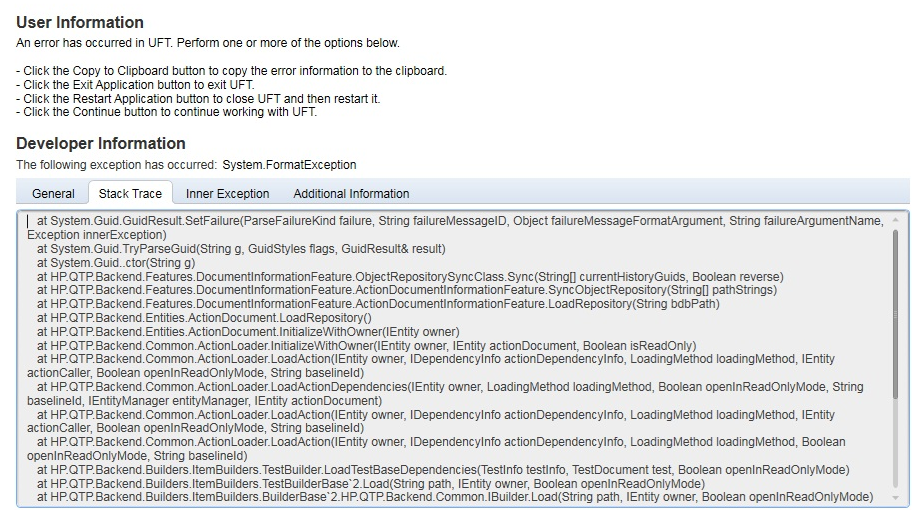 There is some information about the question I've found:

I suppose that (because of no multithreading in UFT's VBScript) there is no possibility to set limit test execution time with the means of UFT (some proof found in post time limit for QTP script\'s execution).

Possible solution is to start test & timeout to kill UFT process at once in the .bat file

And part of RunTest.vbs VBScript that runs test (it should kill timer if test is completed): 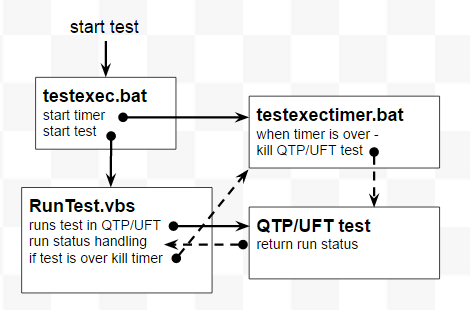 Does anyone use better solutions?

Wow... you're making this much harder than it has to be.

QTP actually DOES have a timing system built in, you can set and check MANY timers as needed.

Here's how I wait for something that could take forever:

You could also run a fork of your main vbs and kill it once the timeout is reached:

Java allows to control execution time of the process (threadNew.join() causes the current thread to pause execution until threadNew terminates). So I finally came to the solution of Java-starter for UFT test.

But it is needed external library (Java-COM Bridge) for Java to deal with UFT directly. And VBScript does not need any libraries to start UFT (and also there are some logic was already in RunTest.vbs) so I have used linear structure of calls:

And UFT is killed from inside Java program if timeout is expired and there is no exitcode from RunTest.vbs. Here is RunUftTest.java:

You can incorporate all code inside RunUftTest.java to avoid RunTest.vbs usage if you wish.

Not the answer you're looking for? Browse other questions tagged qtp hp-uft vbscript uft-12.52 batch-file or ask your own question.

0
QTP is not firing recovery scenario

3
What are the Best Free HP QTP / UFT Advanced eLearning Training Videos & Tutorials?
2
(QTP / UFT) How to change an Insight image during execution?
0
script for clicking link in QTP/UFT
2
How to select tab buttons in java tab panel with QTP/UFT?
0
“Unable to open the [test name] test.” message when starting QTP autotest from QC
0
QTP is not firing recovery scenario
0
How to get color of java table row/cell with QTP/UFT (java swing application)?
0
How to re run the test failed in batch runner programatically?
1
How to check property of JavaToolbar button with UFT/QTP?
1
How to identify & choose unique properties for objects identification in QTP/UFT?