Who invented WebDriver ThoughtWorks or Google?

It's kind of late asking this question. But reason I'm posting it because information on these two links:

It is Google's Product

It is ThoughtWorks product: 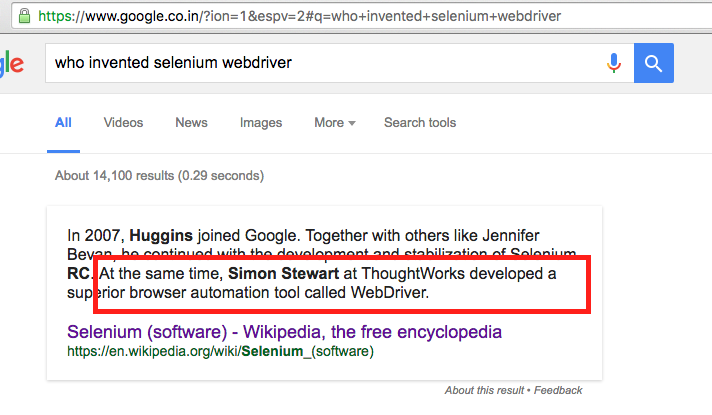 Jason Huggins was the person who invented Selenium RC in 2004 as an Internal Tool at ThoughtWorks.

Latter on when peoples start noticing a lot of cons about Selenium RC (also called Selenium 1) like security, usability etc; So Jason Huggins and his team met Google in 2007 and they together started working on making Selenium more advance (also Called as Selenium 2) although in ThoughtsWorks Simon Stewart Continued on Working Selenium RC and developed a superior browser automation tool called WebDriver.

Then Jason Huggins from Google and Simon Stewart from ThoughtWorks combined their work and Selenium-Webdriver(also Called as Selenium 2) was Born.

Selenium is an open source project. Since its begining in 2004 at ThoughtWorks with Jason Huggins building the Core mode as "JavaScriptTestRunner" for the testing, over the years many people have contributed and evolved from Selenium IDe to RC to Selenium WebDriver. It is not a Google Product, but yes many people working at Google have contributed to the project. You can find details of the history and contributors of Selenium here and here.

From Simon Stewart book Selenium WebDriver how and why WebDriver came to be:

While Selenium was being developed, another browser automation framework was brewing at ThoughtWorks: WebDriver.

When WebDriver was released there were significant differences between it and Selenium RC.

Later in 2009, both projects merged - posted by Simon Stewart on Google blog.

It is well worth to read the link to get better understanding what were the problems and obstacles to be solved, which inevitably shaped the solution.

Not the answer you're looking for? Browse other questions tagged webdriver or ask your own question.

5
WebDriver login and click action ain't working…
15
Problem with IE9 security certificate when accessing HTTPS URLs using Selenium 2 WebDriver
6
What's the best approach to asserting dynamically generated values with selenium?
3
What automation tools to use with PHP development?
1
Selenium WebDriver and Highchart testing
3
Using Selenium's PageObject pattern and an Open() method
0
Use Selenium Webdriver to capture all the values from Google Auto Suggest Edit Box and display them in the console
2
International + locale automation : Is this good practice to load large amount of data into cucumber / selenium via yaml files for test automation?
2
Selenium IDE with tables or manual test
5
How to get multiple login instances working in Internet Explorer?