I am looking into TDD and I don't fully understand the approach. I am a web developer using PHP and I can't find any examples of TDD which I can relate to.

So far this is what I understand of ATDD: 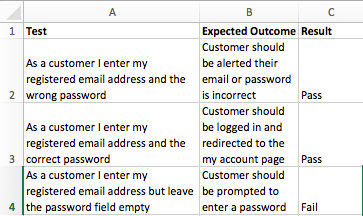 (Obviously there will be alot more acceptance tests but this is just extract). 90% of the tests will be automated to help with regression testing in the future

This idea about TDD is that you start with a single test and start building code from there to furfill the test.

You have a couple of levels of test, as described in the test-pyramid, you can start with a UI (end-2-end) level test and then this should result in Service and Unit level tests.

In your case the Acceptance criteria are the UI level tests, but you do not keep them in an Excel-sheet, but they should be executable tests by code. For example with Fitnesse or Cucumber.

The whole TDD flow is a bit bigger, as described in this video Test-Driven Development (that’s not what we meant) by Steve Freeman

On the fourth level it starts with "Writing a failing end-to-end test" which is followed up by "Write a failing unit-test". You do not even talk about unit-tests in your question.

Also your example start with the login tests, although you might need a login fucntionality this is not a suggested start. Start focusing on feature value and only build a login when you really need it.

To practises skills multiple kata's have been designed, you can start with the StringCalculator kata. Just start with the most simple test you can imaging, something like testing input "" returns 0. The rest should follow from there. The coding dojo handbook has a long list of kata's to practise all TDD skills.

Not the answer you're looking for? Browse other questions tagged automated-testing agile-testing learning tdd or ask your own question.

4
Is specification replaced by tests in TDD?
2
Is TDD used with all types of testing?
1
TDD and client-server interactions
1
How to dissect a large legacy codebase and start using TDD
2
TDD and Refactoring
4
Automated Testing: What QA processes should be directed at validating test code?
4
Why does the test always fails at the start in TDD?
3
Using Protractor to test AngularJS frontend- how do I get HTML DOM objects that are nested within other objects?
7
Is dependency injection suitable for TDD?
1
What are the effects of TDD - Development time/Quality