Application object is not defined after closing and opening again. There are no runtime errors but all actions performed under object in application can not force it to act, e.g.:

the object workersJavaTree does not exist anymore.

After reopening the object in application UFT object should be reinitialized:

And then all actions under the object are performed well.

If there are several objects that are reloaded/reopened (e.g. reload a form with several fields & controls) you should init() the top-most one. And all children after that are available. Chech the next picture: 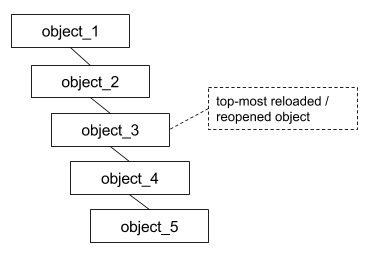 You should only do object_3.init(), after that you can start with object_5.doSomething().

Sometimes object is not seen right after the initialization, so I have created custom init() function with check that object already exists:

Attention: in this function you should use the object that would be used in action not the top-most.

Not the answer you're looking for? Browse other questions tagged hp-uft or ask your own question.

0
UFT Run Results Viewer does not open test results
5
How to limit test execution time in UFT/QTP?
1
How to check property of JavaToolbar button with UFT/QTP?
0
UFT 12.52 / VBScript - Test object exist, is visible and enabled before take an action
0
Problems to execute a UFT script by a VBScript file