What reasons would companies have to use web testing (Selenium) and API testing (SoapUI) for the same functionality?

Scenario: I want to test a new functionality in the system "login and verification". I assume that developers have done the unit and integration test, and I am just doing a system test

Do companies (that want to do things right) tend to separate tests for API using one tool (like soapui, that will later let you do performance tests) and then write separate tests in another tool like Selenium for the web interface? Or do people tend to do just the web testing automation because if there is a problem, the tests will show it anyway?

I particularly want to know why companies would have both API tests and web tests when this causes duplication of effort.

Yes, this is typically done in a commercial context, but it does not need to be exactly as described.

As you already noticed, developers should write unit tests. Those tests as you probably know only test the smallest distinguishable things in the code.

Higher up there should be integration tests - either as an extension to the unit tests or maybe in the form of testing the API. If the integration tests directly call the APIs, I would assume that they aren't written by a tester, but by a developer. If the tester is focused on testing the functionality, the APIs are not his main concern. If the tester has a more technical role, then they could be one of his responsibilities.

You as an (automated) tester write automation web tests via Selenium. That should be the highest level in terms of testing, as it tests all features combined. These tests will call a lot of APIs, but not through the APIs directly, but through the web interface. As that is another layer on top of the APIs, this is not the best place to specifically test the APIs.

Another advantage is that API tests are more easily setup as performance tests: running the API tests on 100 machines with 100 calls per second is much easier than doing the same thing with Selenium tests.

Concluding: in my opinion having three levels of automated tests has a lot of advantages. Of course, it implies duplication of effort, but I do believe that it is worth the effort. It is also possible to have a more technical person (maybe even a developer) write the API tests, so that you as a tester already have a better feeling of the quality before you even look at it.

why companies would have both API tests and web tests when this causes duplication of effort.

In short, because those tests are different in nature, help discover different types of bugs and have different properties.

However, they suffer from a number of issues. They:

On the contrary, API tests are usually:

So, when building a test suite for a login page I would choose different types of tests depending on what you want to stress:

When choosing how many tests I would have, I would follow a testing pyramid: 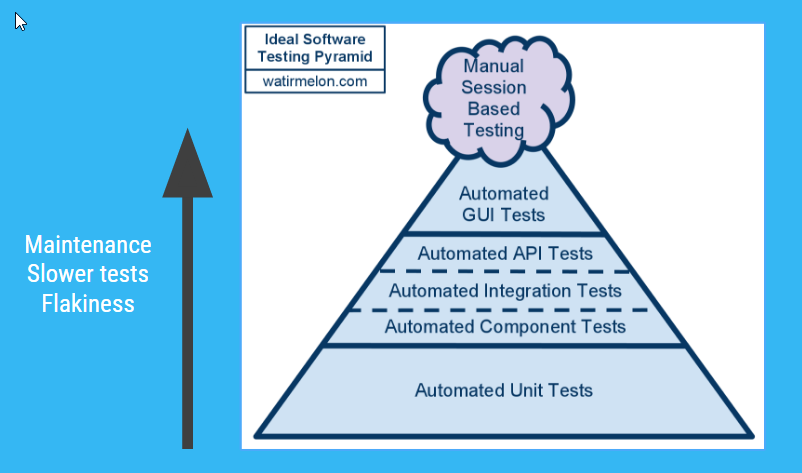 You can find more information on that in the following articles:

I advise our teams to write mainly unit-tests, but at least ONE test on service (e.g. API) and UI (e.g. end-to-end) levels of the test-pyramid. Just a happy path test is sufficient.

Why do I advice that? The main reason is to make sure that each level is build testable.

If the levels are testable, then when a defect occurs and after it is fixed, it should be easy to add a test to prevent that defect from re-occurring. If for some reason that defect is hard to test at unit-level. Having no tests on other levels might make it easy to take a short-cut and not test it at all.

Duplicate test coverage for other reasons seems a waste of time. Extra coverage costs just extra time in maintaining it.

Yes, it is a common practice to have multiple levels of test, even if there might be some overlap. Unit tests, API tests, and UI driven tests.

1
Documentation for Web Service testing with SoapUI
1
End-to-end testing from desktop app to website
1
How can I organize my Specflow test cases?
0
Selenium Webdirver C# Running more than one test class from the test suite
1
How to control the state of databases in between API Tests?
1
Graphical front-end for jmeter
0
One Tests or Multiple Separate Test Automation BDD