Detecting tests that will never fail

We have a rather big test codebase (~1500 test cases) for a Python/Django application.

From time to time we stumble upon existing tests that will never fail:

Is there an effective (preferably automated) way to find these kind of tests?

I've recently opined, provocatively, that a test that never fails, adds no value.

At a more practical level I look to use the following practices.

Ideas such as 'delete tests that haven't failed in a year' are provocative and have some attraction but in practice I've never seen it and really can't imagine actually doing that. I have reviewed test suites and decided to remove tests due to duplication, slowness, fragility, not representing user functions, etc. but the mere fact they haven't failed in x period of time doesn't some like a criteria I'd be in favor of or able to convince my pair

Other ideas to address your specific points:

Another idea which we have not yet applied in practice is Mutation Testing.

Which in practice means that if there was a mutation/change (typically a common programming error) introduced in a code and a test did not react to a change (or set of these changes) - it is a sign of a test that potentially is not properly testing a module under test.

In Python world, there is the cosmic-ray mutation testing tool.

Your situation is there because of Technical Debt. Everything you pointed out is controlled easily enough via Continual Review of your test suites. The programming world has words for this "Refactoring", "Code Reviews", "Test Result Reviews".

Here's the steps which will allow your team to start actively maintaining your test cases, suites and ultimately the test plans. The end result is absolute confidence in your product and a shift into automation.

I would like to present a generic system under test and its test suite as below: 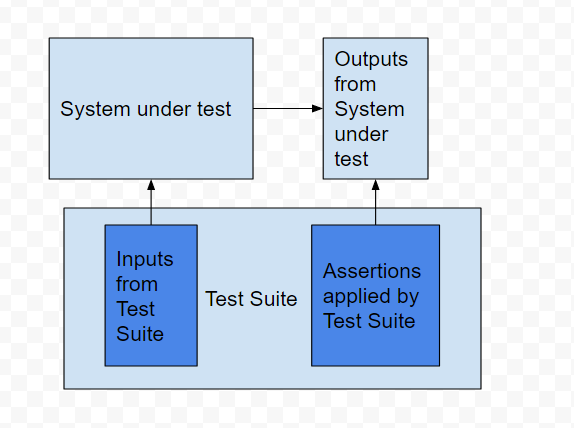 Tests that assert not what they supposed to assert

I read somewhere a suggestion that any test which did not failed for a year should be a candidate for elimination.

Not automatically eliminated - maybe for some critical functionality you want multiple tests and multiple checks (defense in depth - assuming that one of the duplicate tests checking same condition might fail to detect the error) but "a" good candidate for elimination.

One system I worked on had a 100% failure framework, (actually it was a set of stubs output by the design tool), that was run as a part of the automated test suite, (Jenkins), with an evaluation criteria that the number of failures had to exactly equal the number of tests, (there was also a 1 test 1 result policy). Whenever the criteria was not met the test that did not give a fail result was revised.

Based on a number of questions you have submitted I think your best course of action is to engage with a company that specializes in Quality Assurance.

This question, like many of the questions you have asked, are indicative of much deeper systemic issues. You're trying to apply band-aids, but in reality it's time to amputate.

Not the answer you're looking for? Browse other questions tagged automated-testing test-design python quality-assessment code or ask your own question.

11
How to deal with automated test cases that always fail?
28
How can developers be assured that their software is fault free?
14
Will implementing Agile generally improve code quality?
10
Detecting complicated CSS selectors
20
How to deal with flaky tests that have intermittent failures?
3
Should you add explicit waits for all elements in RobotFramework/Selenium tests or only the ones that fail?
1
How should I handle tests failing prior to a logout and causing other tests to fail?
4
Fail vs Error in automated tests
4
Certify in writing that your software will work flawlessly
2
How to explicity fail e2e tests on unexpected behavior?