What is Snapshot Testing?

I've recently stumbled upon this new (at least to me) testing type: Snapshot Testing:

For Facebook's native apps we use a system called “snapshot testing”: a snapshot test system that renders UI components, takes a screenshot and subsequently compares a recorded screenshot with changes made by an engineer. If the screenshots don't match, there are two possibilities: either the change is unexpected or the screenshot can be updated to the new version of the UI component.

Has anyone tried that? When is this type of testing applicable? Is this a replacement for unit testing or a just a way/style of writing them? Is it only applicable for the UI tests?

As already pointed out by Peter Masiar, you basically compare against a "gold standard". Therefore, I would say that this is a derivative of characterization testing/golden master testing:

Characterization Testing (aka Golden Master Testing) is a means to characterize the behavior of the test object to protect it against unintended changes, regardless of its correctness. In order to do so, the results of a previous (typically stable) version—the golden master—serve as the oracle for the tests (also known as consistency oracle since it compares the consistency between two versions).

Characterization testing (coined by Michael Feathers in his book "Working Effectively with Legacy Code") comes in many different flavors:

Some do pixel comparison, others do text comparison, and there are also hybrid approaches (mentioned by roesslerj). Each variant has its pros and cons, but essentially it is the same mindset: compare against a previous version, regardless of its correctness. There is also a very cool introduction ("the dancing pony" starts at 4:26) to the basic concept by Google, who develops Depicted.

Going back to Jest, the quote you have in your question might be a bit misleading because in the case of Jest "Snapshot" does not mean "Screenshot", i.e. there is no pixel comparison. Consider the following example from their docs:

What Jest does is it takes a React tree and serializes the HTML/JavaScript it generates to a so-called "snapshot file" (.snap suffix):

This is now your golden master, which contains a textual representation of the rendered React component:

On subsequent test runs Jest will simply compare the rendered output with the previous snapshot. If they match, the test will pass. If they don't match, either the test runner found a bug in your code that should be fixed, or the implementation has changed and the snapshot needs to be updated.

If the tested React tree changes (e.g. to a different link), you will get a simple textual diff: 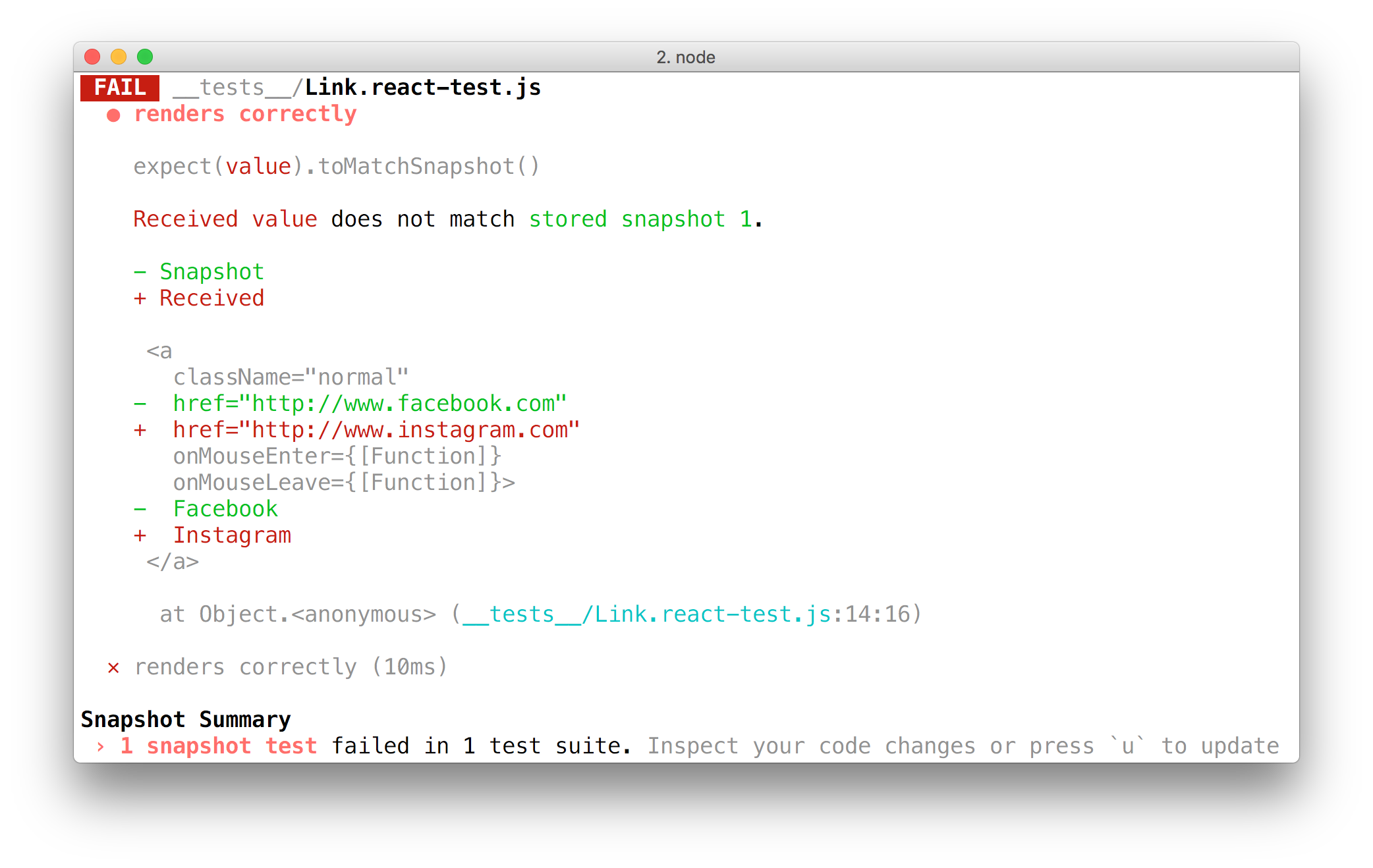 According to the Jest team, this has the following advantages over pixel comparison:

On a final note, Jest is not exclusive to React. It has the concept of serializers, which take care of reading/writing snapshot files. There are default serializers for built-in JavaScript types, HTML elements, ImmutableJS, and for React, but you can also write your own serializer.

So, you could theoretically write unit, integration, and system tests with Jest. I just don't think that it always makes sense. For instance, when you have a simple add function that sums up two integers, why would you use a snapshot file for the result? A plain old assertion does the job.

This kind of testing is testing only a visual appearance of the web pages, so it is in no way a valid replacement for unit tests (which test internal logic of the modules). But it might be a part of integration/system tests.

Applitools.com calls it "visual testing" and provide framework for it. Their framework allows to ignore parts of the screen image (say the part where date/time is displayed), compares the rest pixel-to-pixel, and highlights the differences with "gold standard", if any. With a click you can accept new screen as new "gold standard".

Such visual tests cannot replace standard webdriver-based integration/e2e tests, because it is limited to images only. So for instance cannot perform activities which selenium can, like: pick a random a "thingie" from a list on a page, go to different page, and check if thingie is present (or not present) as required by business logic. For that, it would require powerful OCR, and much more programming (and it would be waste of time, because selenium/webdriver can already do it, and much easier).

But such visual testing is excellent complement to selenium/webdriver testing, because it checks exactly the aspects of the page which selenium ignores. So it is excellent additional layer of defense, after unit tests for libraries, unit tests for single page applications (Angular/protractor), and e2e selenium tests (in the order of preference).

Disclosure: I don't work for applitools and don't use their tool, but I looked a demo and the technology looked cool - it is on my list to try sometimes in the future.

There is also a hybrid approach to that, which is implemented by tools like ApprovalTests, TextTest and ReTest. The general idea is instead of checking individual elements, checking everything at once. If the contents hasn't changed, then the layout should not have changed as well.

The problem with pixel-compare tools is bulk-changes. If you change the Logo, each and every test fails and has to manually be reviewed / approved.

Disclosure: I work for ReTest.

Not the answer you're looking for? Browse other questions tagged automated-testing test-management characterization-testing or ask your own question.

2
Is there a dancing pony on the screen? (Visual testing)

6
What is the relation between development hours and testing hours?
5
What testing procedures/software would you recommend?
1
What is customer focus testing and how do I implement it?
3
Choosing a tool for iOS UI automation providing recording and inspection of elements
2
What are the best practices for Integration Testing of a middle-ware?
1
java.lang.NullPointerException in extent report while using snapshot in POM framework
1
Are Characterization (Golden Master/Snapshot) tests supposed to be human readable?