Is there a patch in Microsoft Test Manager to allow for editing tests while running?

I am in a project which uses Microsoft Test Manager (MTM) for running tests. Although a fairly solid piece of software, it lacks some functionality that other test management software has.

One feature I was wondering if there was a patch for is editing tests while running them. I have seen a blog post somewhere complaining that this is not possible in the straight install. I also think there may be a patch which adds this functionality.

Is there a patch which adds the "edit while running" functionality to MTM?

This has been added in Visual Studio 2012 Update 1. It adds an Edit button when running a test case.

You can edit a Test Case while running it now. Here is a screenshot with the edit button. 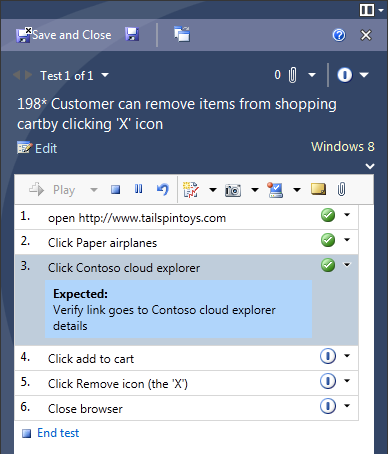 I agree with you, this would be a great feature and Microsoft should consider this in a future release. I create many, many test cases for others to run and this would be a huge time saver for the whole team. Especially if when working in short sprints and constantly having to update test cases to reflect newly completed tasks and bug fixes.

However, can you just run a second instance of MTM?

I typically have more than one instance of MTM running: one on my host machine, and another instance in the virtual machine which I am running the test on. This allows me to make changes to the test case on my host machine instance of MTM as I go about testing on the other instance in my VM. Note: if you want two instances of MTM.exe running on a single machine (e.g. where one is in design mode and another in run mode) you'll have to launch the second MTM instance as another user as it is a single instance application

Not the answer you're looking for? Browse other questions tagged manual-testing mstest mtm or ask your own question.