I thought I finally figured out a way to understand all testing terminology ... successfully fit all the pieces of the puzzle together. Using a matrix. An analogy to this matrix would be a matrix of dog breeds; where x-axis (or y-axis) represents the name of the dog breed and the other axis lists characteristics which define that dog breed. So for example, Smoke test is a dog breed ... a characteristic would be that it is a type of functional testing, and by it's definition, it is also of type regression ... smoke test can be done on UI, API, or back-end area, it can either be testing acceptance or system requirements.

I want this way of understanding the different testing to be correct. This is the best way I have found to understand the testing world. The matrix helps you to ensure that you have covered every combination of testing.

[Testing classification matrix]: The header row for this table (smoke , sanity, security ...) are just a few examples of what could be on the top row. The Blue columns is supposed to successfully cover any imaginable type of test possible under the sun (nothing is left out ... everything falls under one or more of the blue categories). 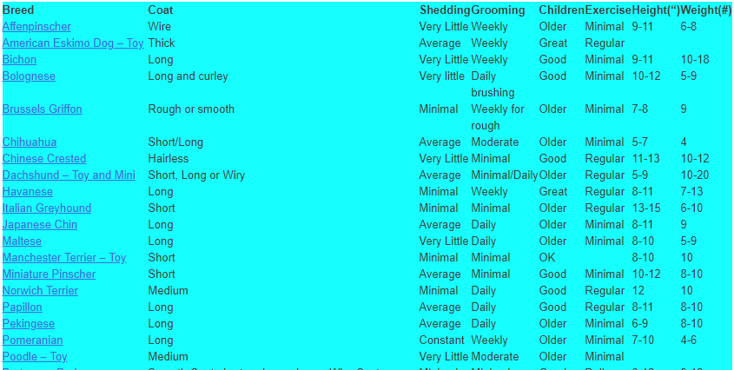 Ensure full gamut of testing is carried out to ensure full coverage. My initial thought/hope was that research within the testing world had been done on how to arrive at best testing process which best covers and protects the code and was hoping that a starting place would be by ensuring you are not leaving out any type of testing and to ensure the proper team is conducting the testing.

After putting together this matrix, I did find other documentation attempting to show a comprehensive understanding of the testing types very similar to the matrix which I put together. 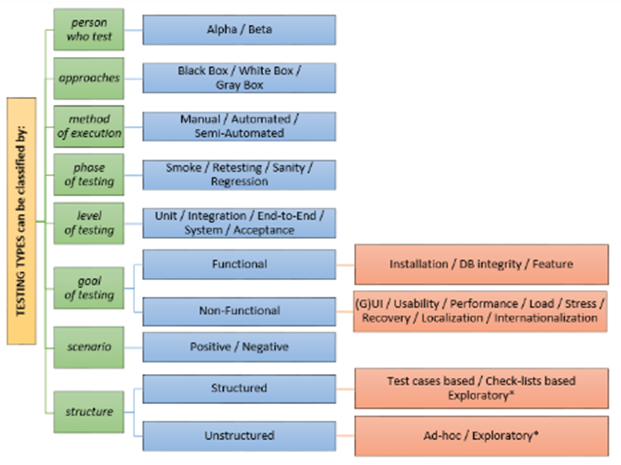 As you have discovered: there doesn't exist a comprehensive rule set of what to do in what circumstance. And as someone who is in software development and testing for over 20yrs, I don't think we will get to that ever. There are different 'schools' or philosophies in testing with different ideas on what testing means and how it could be organised. Besides that: things change and evolve. People have different ideas and opinions and experiences and needs... As there is no single coding language and practice that defines 'programming'.

I guess there is a reason @trashpanda stated: "It's an absolute minefield" :-)

Note: have a look here: books on testing

I see what you're trying to get at.

In my own opinion, I've found that the easiest way to understand testing is by looking at test levels and test types. For example:

You can execute one or more test types within the testing levels (think of them as phases), and some will apply more than others. For example, you would exploratory testing during the system integration phase, but not during unit testing.

If you can get your head around the different test levels and test types on Wikipedia, then you can start looking at test approaches and processes afterwards... it's an absolute minefield.

Not the answer you're looking for? Browse other questions tagged regression-testing terminology functional or ask your own question.

10
What do you do when you encounter overloaded terminology in your workspace?
6
Recommendations for functional testing a WCF service
9
What proportion of different types of software testing does your team use?
5
Is this a good simplification of fake object types?
4
Fail over testing Terminology
0
How testing of Banking/Insurance Domain is different then any other website testing?
4
Scope of regression testing
1
What is the term to convey the use of black, gray, and white-box testing?