I have Web Application where the source code is in Python. All the regression tests are in Java. I wish to perform Code Coverage for the application. Please suggest a code coverage tool to instrument the python application .I should then be able to execute Java selenium tests over it and fetch coverage report

You should install coverage package. I have both python2 and python3 on my computer so I'll show you how to deal with my case and python 3.

So say you have the following program: 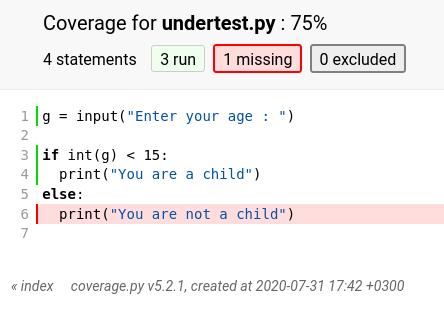 Disclaimer: Since I have both 2 and 3 versions of python at the same time I need to use commands which explicitly use version 3. I am not sure what would be the behavior if you have only version 3. So if those commands won't work for you, try to omit 3 (e.g. pip install coverage or coverage run blah-blah-blah)

Not the answer you're looking for? Browse other questions tagged python coverage test-coverage or ask your own question.

1
How can I measure the coverage of my E2E tests?

5
Recommendations for code coverage tools?
6
Tool to minimize tests number and maximize code coverage
2
Combining coverage from unit tests and functional tests/Selenium
8
Measuring code coverage in end-to-end tests?
0
Which tool can I use (as a tester) to track the code coverage for a web based application?
2
Mocking HTTP reponses in Selenium Web Driver using Python
1
Reporting for Python tests built using PyUnit
5
Accumulated mass of tests - how to work with business to remove / refine?
4
Code coverage for Selenium Tests