How do you test Microservices?

I'm in charge of leading a QA Team and one of our tasks is to develop Automated Microservice Tests.

We've been successfully testing these Microservices for a year. In summary, our Testing Process is:

However, the company is migrating from Docker to Kubernetes, we will use a different REST API, so the Tests will be refactored. For this reason, before refactoring the DevOps Team threw an idea around, what if we changed the Testing Paradigm and, instead of developing Automated Microservice Tests, the QA Team would develop "Testing Microservices"? These "Testing Microservices" would run in the Production Environment and validate all generated messages. In my opinion this goes against all good Testing Practices but I'd like to hear your opinion.

Plus, our Automated Microservice Tests could also do this, we don't need to develop "Testing Microservices". But again, there are only disadvantages. Each Microservice generates tens of thousands of messages daily. Why would we perform tens of thousands of Requests to test each Microservice, when the Test Scenarios have already been identified and the output will vary accordingly to half a dozen input combinations? We can do the same task performing only 6 Requests, thus avoiding the degradation of the server's performance.

There needs to be little more clarity on how the team currently works and what they expect to be working as.

Huge drawback of this implementation:

What DevOps team recommends is : 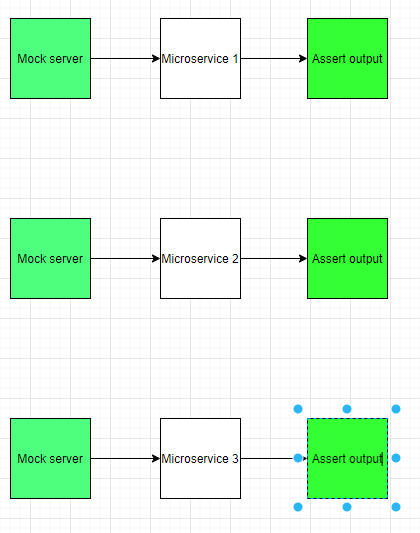 You can use wiremock if you are using Java. But i recommends to migrate to postman as it supports mock servers inbuilt and it is really easy to use

You test micro services the same way you test all software, with Unit, Integrated and UI tests. As PDHide details nicely, a key part of micro-services is that they give you the ability to perform unit and integrated testing without all the dependencies that traditional testing would require. It is up to quality software engineers to both recognize and implement this. It won't just 'happen' and traditional business will often not recognize this technical distinction and need.

The question you seem to be asking is perhaps more

Should we test in production?

That is a great and very relevant question.
Companies that release hundreds of times a day obviously can't spend a traditional amount of time running and verifying slow and brittle end-to-end UI tests for every use case scenario.

Well actually many do, but it is a nightmare, the value is greatly diminished by the blocking effect and slowness to get feedback to the developers. This may be accompanied by unhealthy work environments that are characterized by finger pointing and blame assigning. The poster on the wall may say we're all one big team but the daily interactions may not reflect that fully.

Initially, automation over manual testing seems to address this (as vendors loudly proclaim) but as automation suites with thousands of tests are implemented, the bottleneck returns, though now for different reasons that are now about the automation itself. After a while test suites take a day, or more, to run. Not good. The startling thing about this is that companies who have figured this out are not small, one-off startups, but rather the industry giants of our time - Yahoo, Facebook, Netflix, Amazon, etc.

In order to do this that are two main practices:

On re-reading your question, one idea comes to mind - maybe testing micro services would work if viewed specifically as the integration test layer in the Agile Testing Pyramid. Neither replacing or duplicating the extensive unit tests that accompany the code as it is being written (TDD) or the selective UI tests (ideally through a BDD process). This does raise an interesting dilemma though - if you are rigorous about writing tests for functionality your testing time may grow endlessly unless you constantly refactor at the test level itself, e.g. move UI tests to Unit tests, mock out more dependencies, remove tests that never fail or are covered by others. etc. This can lead to approaches such as a fixed test run time but this is a more advanced tropic.

Not the answer you're looking for? Browse other questions tagged automated-testing microservices or ask your own question.

2
Why test code should not be included in software application?
1
How do you automate testing a web applications server side input validation?
9
Test automation for microservices architecture
1
Introducing contract-based testing
2
How often should we carry out load testing during development?
1
Staging Environment with API Gateway Environment
1
Non-functional test, in which CI test step is it best to use?
2
What testing should be carried out in which environment?