Developers have code kata to practice skills. What test equivalents are there?

Deliberate practice is the key to developing mastery of a skill. If you want to practice your programming skills, there are a wealth of resources like code kata.

What are the equivalents for test design?

Edited to add a bit more detail about deliberate practice:

In order for deliberate practice to be effective, it needs to be demanding, targeted at improving specific areas of your performance (and you have to approach your practice with specific goals in mind), continuous feedback on performance, self-reflection, and repetition of that practice over a long period of time. Code kata work because you have a specific goal, you can see when you've reached it (feedback), and compare your performance with other people's attempts (again feedback, and self-reflection), there are a lot of kata targeted at different areas (targeted at specific weaknesses, repeated practice).

Great question. I'm a huge believer in these kinds of activities.

You Would Enjoy Spending Time with Markus Gärtner

When I think of the software testing community's response to code katas, I think of the prolific testing blogger Markus Gartner and his involvement in promoting Testing Dojos. They are collaborative, facilitated, group exercises designed to test software, explore new testing ideas, and learn from one another. Actually DOING testing, not just talking about testing. 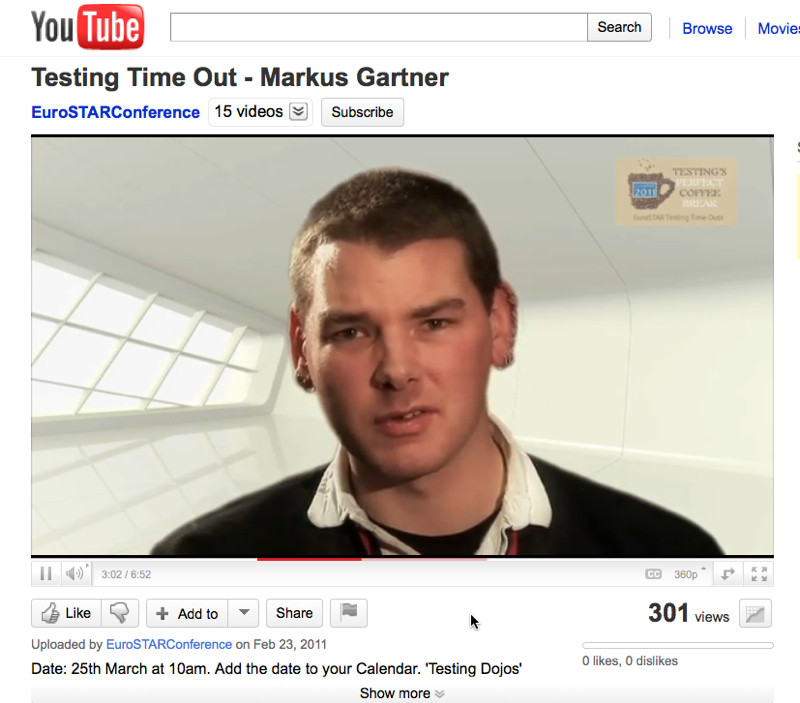 Markus recently spoke at EuroStar about Testing Dojos. His seven minute video, available here, is well worth a listen.

In addition, Markus has written a detailed report about his experiences at Belgium Testing Days when he led eight collaborative testing missions in two days. His full report (some of which is shown below) is available here. 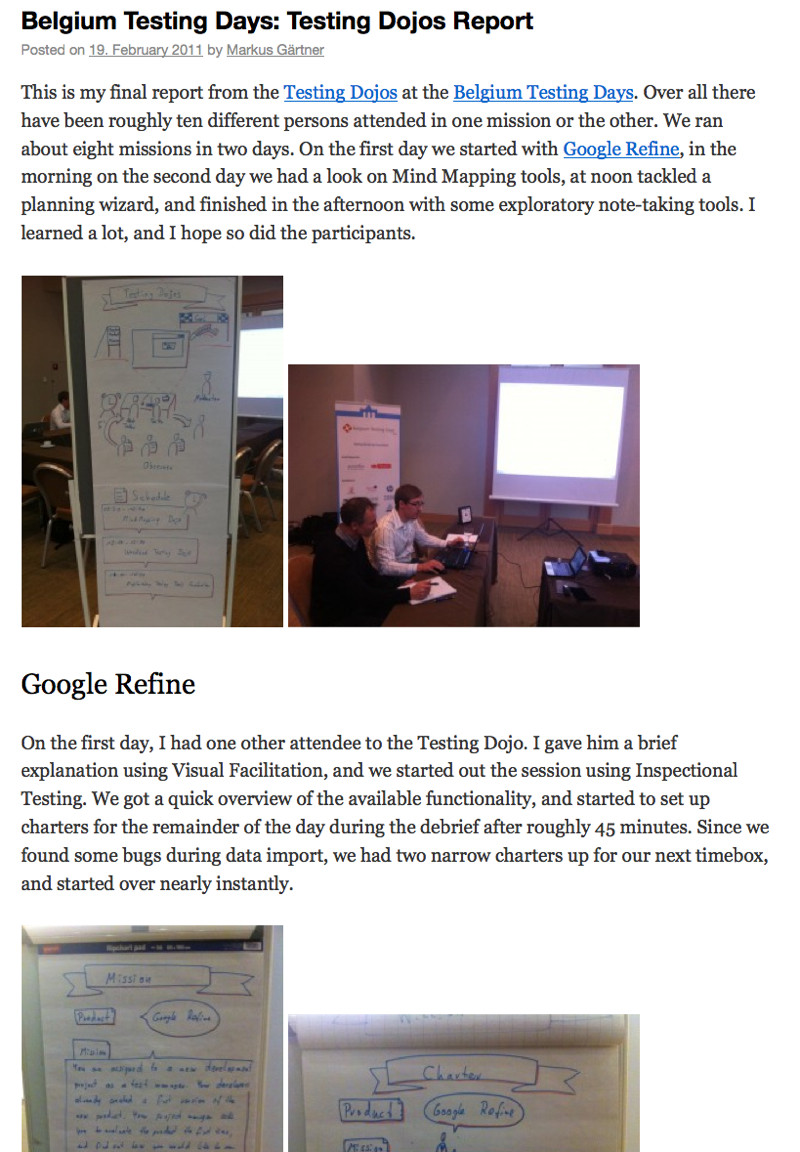 When asked for his advice recently on a testing mailing list, Markus recommended http://testing-challenges.org as a great source of ideas for Testing Dojos.

Weekend Testing - Now With a Group Near You

Last but not least, weekendtesting.com is an outstanding way to roll up your sleeves with other testers and learn by doing. There are chapters in India, Europe and North America now. There is even a Weeknight testing event.

One of my favourites is Parkcalc ... Parkcalc is a real world application for calculating how much your parking is going to cost at the Gerald R. Ford international airport. It is also full of bugs, yet it works mostly. The requirements come in the form of the parking brochure.

So you don't pound the real one into the gound there are a couple of self hosted versions, like the one here.

Parkcalc is somewhat infamous after it was a weekend testing target, and there are a number of disections of the bugs that can be found available.

Parkcalc is also a great tool to demo the capabilities of automated testing tools.

Anything is good practice for QA. It doesn't even need to be software. I have tried all sorts of QA approaches on the elevators in my office building, as their code is buggy as hell.

I'll admit that it's a difficult question for me to answer, though, because I can't really turn my "QA sense" off at all. It's constantly running, looking at how things work and how to break them.

Software testing can be a very repetitive job. When testing something for the tenth time, it is easy to fall into a mindset of "This is boring, so I'm going to get this over with as quickly as possible." We fall back on easy assumptions about how the product is built and how it will be used. And yet we are paid to pay attention and question assumptions, even on the tenth time.

I believe a tester needs to cultivate paying attention. Sometimes this means stepping away from your work, your smart phone, your laptop, your iPod, and your game console, and just being quiet. Practicing this deliberately, on a regular basis, may help you to slow down and pay attention to your work.

You could look up Testing Dojo's as well, and add another URL to the answer list:

Some Programming Katas might be useful as well, I believe there used to be a few Ruby Kata's that were more geared towards testing but that was a few years ago and I don't know what the state of those are now.

I think the original has stalled, or I can't find it, but these two seem newer and more interesting. When I get time to get into Ruby again I'll probably try them out myself.

For starters, there's every piece of software in the world if you just want to improve testing skills. For a deeper practice, I recommend things like open source projects, weekend testing, and uTest. Although I've never been able to make the time for weekend testing, I've participated with uTest a few times and always found it not only a great way to subsidize the cost of my professional development, but, I've also learned a lot from it.

If you are a member of AST (the Association for Software Testing) or just want to do the self-study method I'd recommend taking a look at the Black Box Software Testing courses:

Taken through AST you are partnered with others taking the course where you can get deliberate practice in an effective and demanding manner.

Not the answer you're looking for? Browse other questions tagged learning self-education training or ask your own question.

6
Where to get feedback on my testing skills?
3
Would having a Certificate help?
3
Competition ideas between test teams
3
What is a good training to signup for to get training for my SQA department?