Is it worth investing much time into iteration testing?

I recently had a test assignment where I was testing a pretty well solidified API. The team started phase 1 by creating basic functional, boundary and error tests for each API call. It turned out to be three or four tests per API call. The error checking was really basic. Things like row counts for inserts and so on. We found a majority of the bugs in this phase during test case creation.

Once that cycle was done and all the bugs found were fixed, phase 2 used a data driven approach. We exercised tens of thousands of variations using a fairly robust set of test data with "poison pills" in the data wherever we could. To my surprise, the number and severity of bugs found in phase 2 were quite low compared to the number of person hours invested. I had expected to find some outlying killer bugs or at least a fair number of medium priority bugs.

Based on the number and severity of bugs found, the team's time could have been better spent with ad-hoc testing or moving on to other product areas.

Is my result a fluke, or when you are automating at the API layer do you find you hit the point of diminishing returns relatively quickly? 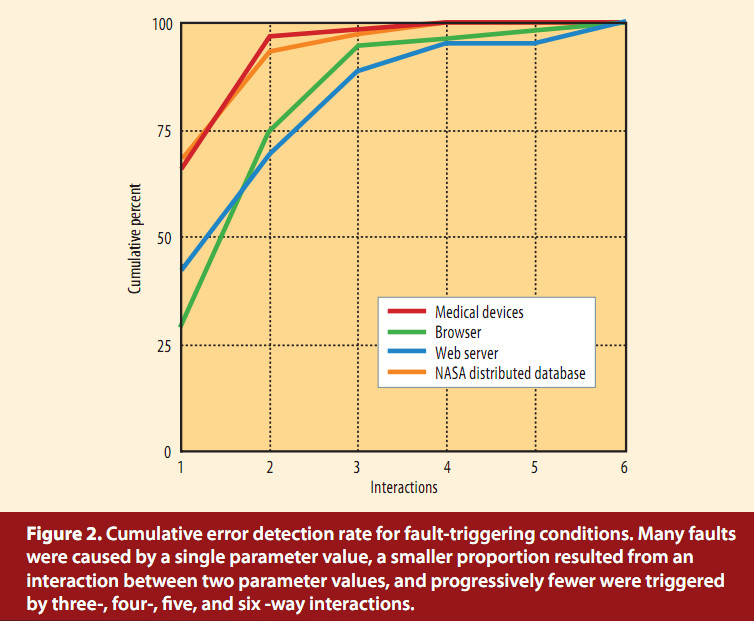 The chart, taken from an article called "Combinatorial Software Testing" published in IEEE Computer that I co-wrote with 3 PhD's, explains that the significant majority of defects can be triggered by testing each value you can think of at least once. Several thorough studies were done to answer the straightforward and important question, "how many test inputs would be required to trigger defects in production today?" Four very different Systems Under Test were examined (including defects in medical devices - in red - and the Mozilla browser - in green). Each defect in each SUT was categorized... to trigger this defect, we only need one test input; in order to trigger this one, this specific PAIR of test inputs need to appear in the same test case, etc. Approximately 85% of the defects in production could be triggered by just one or two test inputs. Exactly one defect in the four studies required six specific test inputs to be triggered. None required 7 or more.

What are the implications of these findings?

They are huge. According to these findings:

The biggest bang for your buck will come from testing every test input in at least one test case.

The next biggest bang for your buck will come from testing every PAIR of test inputs together in at least one test case.

The next biggest bang for your buck will come from testing every single possible combination of three test inputs together in at least one test case.

The final implication from these findings is that if you want to maximize the efficiency of finding defects in a situation like yours:

First, execute all the test inputs at least once.

Next, execute a set of tests that will cover all pairs of test input values (e.g., execute pairwise tests - AKA allpairs tests / 2-way tests), then consider executing the smallest possible set of tests that will ensure coverage of all possible combinations involving 3-way combinations. If you find very few defects when executing your 3-way tests, you may seriously consider stopping your testing without executing higher strength test sets.

What was the reason for these expectations ? Was it the coverage of the tests ? Was it a perceived flakiness in the code ? Were you expecting killer bugs to be still there inspite of them being found and fixed in the previous cycle ? Was there an overlap in paths which were exercise in the previous test run or the current one ?

Secondly,to answer your direct question :: Whether you have hit the point of dimishing return "quickly" or not would depend upon whether your expectations from the second test run ( questions above) being aligned realisticly? Were you expecting too much from the second test run ? And now, where you stand today , still I think it is worth the investment because these would act as crucial regression tests now ! , provided they are robust ( show passes and failure s consistently ) , are actually capable in catching regression ( can be simulated through error injection in the code ?)

Not the answer you're looking for? Browse other questions tagged automated-testing or ask your own question.

19
Are Exhaustive "Brute Force" UI Tests Worth It?
2
Is it worth having one set of tests for both functional and performance testing?
13
Random test data: How to do it right?
3
How much automated testing should we do?
4
How much time it takes to automate 10 test cases of an module using selenium
1
How we can enter data into multiple fields at the same time to make automation faster?
0
How much to separate functional tests?
0
How much manual testing does an automation tester perform in their job?
7
Page Object Model: How much abstraction is necessary?